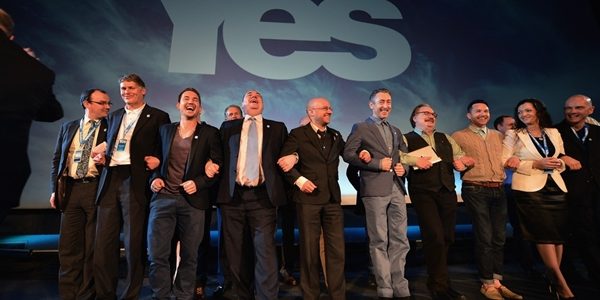 There is already a sense of ownership over a future Scottish Independence Referendum from the grassroots. The groups that flourished in the 2014 campaign have been positioning themselves to make sure that we're ready to step up the campaign when a date is confirmed for #ScotRef.

It was obvious during the last referendum that Yes Scotland just wasn't up the task. It was slow to respond to the smears of Yes campaigners as an angry, nationalist, violent mob. It routinely reacted to events, never seeming to set the agenda. It was reactive, not proactive.

The grassroots of Scotland took things into their own hands. Instead of sticking to the script that Yes Scotland was attempting to read from, they talked to people on the doors and asked the question "what kind of country do you want Scotland to be?". It was this simple question that opened our fellow Scots eyes, the idea that anything was possible with independence.

This won votes. Far more than anything Yes Scotland produced in a press release.

So you can see why the question of having a main campaign - another Yes Scotland - has been asked. Should we have one? Should the grassroots be in control?

My belief is that we DO need another Yes Scotland, but it needs to be run very differently to before.

One of the major problems of the last campaign was the Unionist & media campaign of framing independence as being all about the SNP. It didn't help that any statement from Yes Scotland came from mainly SNP politicians. If you had a mistrust of Alex Salmond or Nicola Sturgeon then seeing these two fronting a campaign wasn't going to help swing your vote. It was more than likely going to harden your stance to voting No.

There is a simple solution to this problem and it is to make Yes Scotland a non-political party organisation. If the media approach them for a comment on a story, Yes Scotland can get it from a grassroots group that is better qualified to answer that question.

"What do you say to claims of anti-English racism?" Let's ask English Scots For Yes to answer that one.

"The economy will tank. Everyone will lose their jobs"? Business for Scotland says differently.

When the media ask for a quote about the state of the NHS in an independent Scotland, get them to write the words "a doctor from NHS for Yes said..." rather than "Nicola Sturgeon said..."

Remove the SNP from as much of the debate as possible. Make this a discussion about Scotland, by the people of Scotland. Put trust in our doctors, our teachers, our economists & the various other industries of expertise we have. Ask the questions to the people that are best place to answer them. Make it hard for the media and the Unionists to dismiss when actual teachers, nurses, doctors & industry experts answer questions rather than a politician.

Yes Scotland should exist, but only as a vehicle to support the grassroots. The grassroots campaigned more effectively and we have the chance to recognise that by utilising the grassroots much better than before.